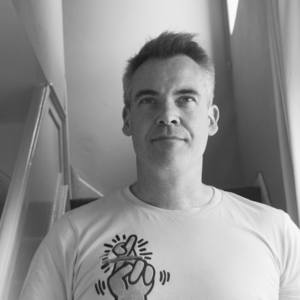 Influenced by hip-hop, ancient history and esoteric philosophy.
He classes himself as an Urban Expressionist, taking inspiration from Graffiti, Street Art and the urban environment. His work is never planned and starts as a doodle, with a long process of going over and re-doodling until he is happy with the end result.

He mostly uses acrylic paint, graffiti markers and spray-paint and enjoy the instantaneous mark-making approach that these materials encourage.
The spontaneity of his paintings means he is influenced by thoughts, dreams, current affairs, abstract ideas and often the music (particularly Hip-Hop) he is listening to while painting. This process means that the final work is always of an expressionistic and gestural nature.

He is influenced not only by contemporary urban art, but also from an interest in Graffiti established in the late-eighties. A further search into the history of art has led to a diverse range of artistic inspiration such as British abstract painters Victor Pasmore and William Scott, through to prolific scribblers Debuffet, Basquiat and Twombly.
He is self-taught due to a bad degree choice in the mid-90’s. 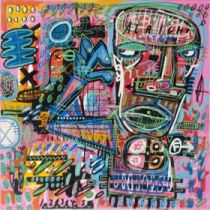